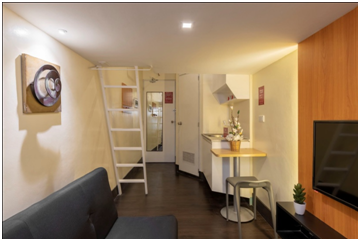 (Pasay City, August 29, 2019) ZEN Rooms, Asia’s leading hotel chain, together with one of its partner hotels in the Philippines, Selah Garden signed off a partnership to host this year’s candidates of the Miss Asia Pacific International.

Now on its 4th edition since its relaunch in 2016, Miss Asia Pacific International is again hosted by the Philippines and promises a memorable one from the pre-pageant events starting on October 04 all the way up to the grand coronation night set to take place on the 9th of October at the Newport Performing Arts Theater of Resorts World Manila in Pasay City. Considered to be one of the most distinguished beauty pageants in Asia, this year’s pageant will surely make its mark with around 80 beautiful candidates from across the continent, vying for the coveted title.

ZEN Rooms immediately welcomed the opportunity to partner with a beauty pageant for the first time. “ZEN Rooms is the number 1 budget hotel chain in Southeast Asia and so is Miss Asia Pacific International when it comes to beauty pageants. For years both of us have been on top of our game so it was natural for us to enter into this symbiotic relationship that signifies high standards and affirms our market leadership.” said by ZEN Rooms Philippines’ Regional Marketing Director, Amit Shukla.

Starting October 01, all candidates of Miss Asia Pacific International 2019 will be staying at ZEN Premium Selah Garden Pasay until the Grand Coronation Night. ZEN Rooms prepared a number of engaging activities for the candidates as well as a visit on their other hotels in Metro Manila such as ZEN Rooms Selah Pods and ZEN Premium Rockwell Makati. On October 03, the hotel chain will formally welcome the candidates from across Asia and present them to the Media through a Press Party. ZEN Rooms is also set to award its recipient of the title “Miss ZEN Asia Pacific International 2019” during the preliminary Swimsuit Competition on October 05 and on October 12, ZEN Rooms and Selah Hotels will be hosting a Pool Party as an after-party celebration for the new titleholders.

“As an international pageant, we are very excited to partner with world-renowned brands like ZEN Rooms and Selah Hotels. Like how their hotels embrace and promote each culture they are located, we celebrate the individuality of our candidates as they represent their respective nations. In that, we are aligned in seeing the beauty in diversity,” explained by Miss Asia Pacific International General Manager, Essa Santos.

In line with all of the offline activities, ZEN Rooms will also be engaging its online community to be part of this partnership through an online competition where the lucky winner can get a chance to stay with the candidates at ZEN Premium Selah Garden Pasay, exclusive invite to all the events, and VIP tickets to the Grand Coronation Night on October 09. The launch of the online competition is on September 09 at www.zenrooms.com and ZEN Rooms’ Facebook page, facebook.com/zenroomsph.

ZEN Rooms, the biggest budget hotel chain in the Philippines continuously disrupts the hotel industry in the Philippines by consistently being on the lead in providing quality accommodation matched with the best hospitality practices.

From its arrival in the Philippines 4 years ago, ZEN Rooms achieved more than what is expected from a hotel startup with humble beginnings. The company’s goal is pretty simple- to help standardize the budget hotel industry in the Philippines. Tourism has been the country’s pride and as it keeps on getting bigger, so is the demand for quality budget accommodation. There are a lot of big players in the budget hotel industry and ZEN Rooms wanted to do more and provide more. The company started by working with the small budget hotels in the country- from helping them streamline their daily operations to make them visible to a broader market across the world.

After operating for the past years, ZEN Rooms now has over 4,500 rooms across the Philippines top50 destinations and 10,000+ rooms across Southeast Asia on its platform. With its constant expansion, the company is set to be in 70 cities by the end of 2019 adding La Union,Baler, Tagaytay, Baguio, and other top destinations all over the country.

Just above ZEN Rooms Selah Lofts are the rooms of ZEN Rooms Selah Pods for mid-range accommodation of 108 cozy rooms with access to the rooftop infinity pool, bar and restaurant with a

For a more premium stay, ZEN Rooms offers ZEN Premium Selah Garden Pasay on Park Avenue. With close to 100 rooms, it is the perfect venue for group bookings as it offers large rooms good for 6, 8 and even 10. Another unique thing about the property is that it’s also the only hotel across Metro Manila to offer high rope activities as well as a Zip line and wall climbing.

Michael Raquiza, Country Manager of ZEN Rooms Philippines said, “We are very excited to announce this partnership today. When ZEN Rooms expanded here in 2015, our goal was just to fix the fragmented budget hotel industry. Now, 4 years later, being the largest hotel chain in the Philippines, our reach has lengthen and our purpose has deepen. We are here to build relationships with hotel owners and support local businesses and we believe that our partnership with hotels like the Selah group exemplifies just that. Together, we improve value-for-money so that our guest can travel more & pay less.”

Jeff Thomas, Managing Director of Selah Hotels, added, “ZEN Rooms has been very effective in terms of tapping the online market and selling our rooms to a wider audience online. I look forward to what more ZEN Rooms can do to elevate our hotels further especially in the international market.”

For as low as P499/night, customers can book a room at ZEN Rooms which includes free fast WiFi, hot shower, cool AC, spotless beds, and 24/7 Customer care at www.zenrooms.com