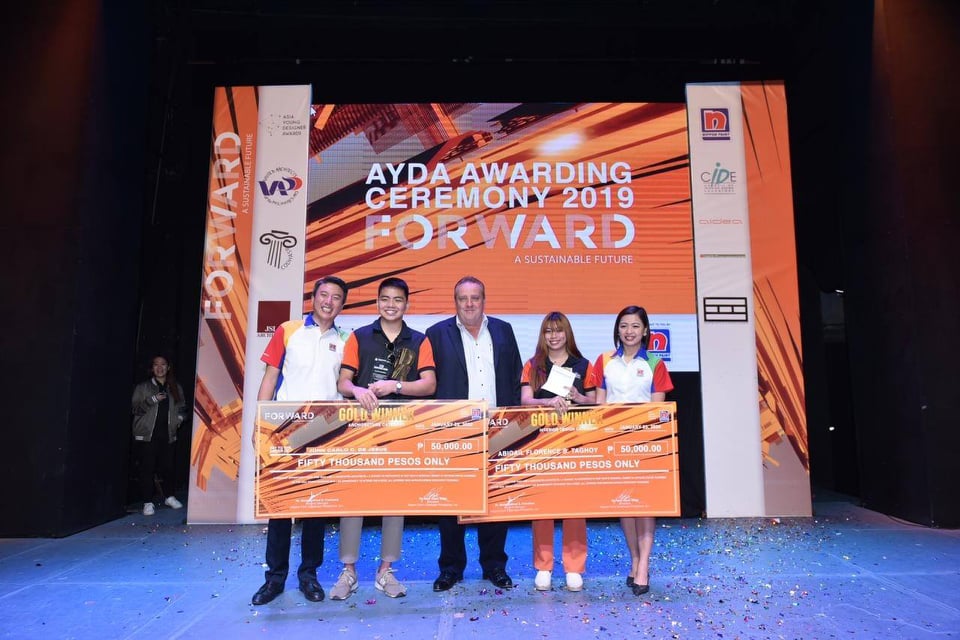 After the fun filled and painstaking process of creating your designs to entry submission, leading into the judges’ deliberating and critiques, the Asia Young Designer Awards (AYDA) Philippines 2019 recognized the winners during the awards ceremonies held at the PETA Theater Center in Quezon City on January 23, 2020.

The gold awardees for AYDA 2019 will go to the Asia Young Designer Summit to compete with the best Architecture and Interior Design students in Asia which will be held in Ho Chi Minh City, Vietnam in March 2020. The winners will battle for the chance to be included in the Harvard University Graduate School of Design’s Design Discovery Program.

Aside from the major prizes, special awards were also given to other participants during the ceremony. For Architecture, the Best in Color Choice Award went to Christian Adrian Manalo of Batangas State University (BSU). Meanwhile the Best Green Innovation Award was given to John Carlo De Jesus and the People’s Choice Award to Johann Orozco, both from BulSU. Best Mentor in this category was awarded to Ar. Diane Alfonso. Also, Bulacan State University was declared The Best College/University, and The Best Supportive School award for the Architecture category went to the Far Eastern University (FEU).

For the Interior Design category, the Best Color Choice award went to Michael lGarbriel Vazquez of DLS-CSB, while Josette Thai of UP Diliman won the Best Green Innovation Award. The People’s Choice award went to Erika Mari Ordinario of DLS-CSB. The University of San Carlos Cebu was named The Best Collge/University and De La Salle-College of Saint Benilde which was declared the Most Supportive School Dr. Hermie Ray Oplado from The University of San Carlos was awarded Best Mentor for the Interior Design category.

Nippon Paint Philippines President Mark Webb led the awarding ceremonies along with the distinguished panel of judges. Webb affirmed AYDA 2019 was the perfect opportunity to highlight the best young talents of the country and showcase their brilliance to the international arena. He also thanked the mentors and academic partners who patiently guided, motivated and shared their expertise to the students, and for allowing them to join. He added that Nippon Paintis proud to be part of the initiative in elevating the amazing Filipino skills and talent.

Visit www.youngdesigneraward.ph or visit www.nipponpaint.ph for more details and updates.