The recent launch of the My City, My SM, My Music at SM City Marilao highlights the life and work of two Bulakeño National Artists – Francisca Reyes-Aquino for Dance and Ernani Cuenco for Music through an afternoon of live music, folk dances, and kundiman.

Apart from the performances, mall goers at the mall had a rare glimpse of the life and works of National Artist for Dance Francisca Reyes-Aquino and National Artist for Music Ernani Cuenco through the exhibit at the My Music house. Both of the National Artists’ insignias serve as the exhibit’s centerpiece. These were also complemented by awards, photos, folk dance costumes and dance instruments from the collection of the Reyes-Aquino Family, as well as original music notation, FAMAS awards and posters of films that Ernani Cuenco musically scored and wrote.

A joint project of SM, the Metropolitan Museum of Manila, the Filipino Heritage Festival, WCOPA, and the Philippine Star with support from the National Commission for Culture and the Arts (NCCA), the National Music for Young Artists (NAMCYA), and Tahanan Books, My City, My SM, My Music is a celebration of Philippine Performing Arts – music, dance, and theater. 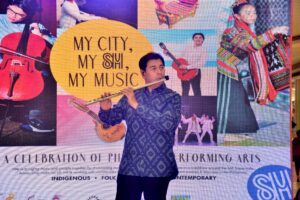 The campaign aims to bring people and music together by showcasing indigenous, folk, classical, and contemporary artistry in a roadshow around the SM Supermalls. Advocating music for all, we are working with communities to mount performances, exhibits, and workshops in key cities around the Philippines. 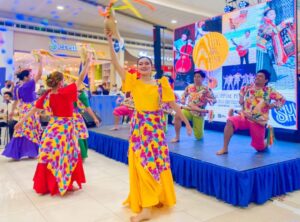 Capping the event was a moving solo piano performance by Lester Vergara of The Piano Gallery Philippines.

Francisca Reyes-Aquino or “Lola Kikay” was a dancer, choreographer, teacher, and researcher who braved the mountain trails and treacherous waters all over the Philippines to reach people and their dances. She is a recipient of the Republic of the Philippines Award of Merit and the Ramon Magsaysay Award. She was also designated as the first National Artist for Dance and best known as the ‘Mother of Philippine Folk Dance’.

Ernani Joson Cuenco or Maestro Cuenco is a Filipino composer, film scorer, musical director, music teacher and Philippine National Artist for Music. He wrote several notable songs and musical scorings for films during the 1960s. He is known for his romantic ballads like Bato sa Buhangin and Gaano Ko Ikaw Kamahal, which have become love anthems for generations of Filipinos. 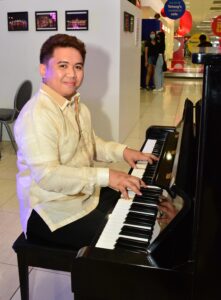 The My City, My SM, My Music event in Marilao is the third in the series after the grand launch at SM City North EDSA honoring National Artist for Music Ramon Pagayon Santos followed by SM City Olongapo Central featuring the classical music of Coke Bolipata. Its next stop will be at SM City Pampanga.