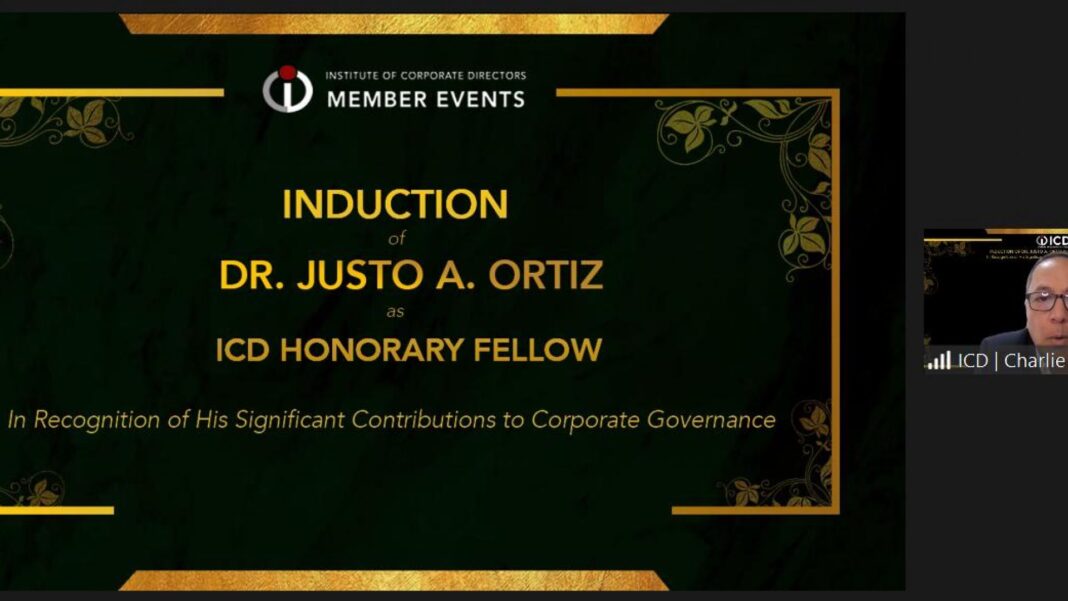 Union Bank of the Philippines (UnionBank) Vice Chairman Dr. Justo Ortiz was recently recognized as an Honorary Fellow of the Institute of Corporate Directors (ICD) in recognition of his significant contributions to corporate governance.

“The ICD Society formally recognizes and invites as Honorary Fellow an outstanding corporate governance champion who has, in his personal and professional lives and pursuit, brought the practice of corporate governance to a much higher level of professionalism, consistent with international best practice and global standards,” said ICD Chairman Atty. Cesar Villanueva.

“We honor the deep social concern, the sharpness of vision, and the intellectual and strategic gifts that have been exemplified by our honoree,” said ICD Founder and Chairman Emeritus Dr. Jesus Estanislao. “May he share with us his perspectives that we pursue, that we hold as we move on to realize our dream Philippines.”

The Honorary Fellow is the highest conferment that the ICD can bestow, granted to distinguished personalities in recognition of their significant contribution to good corporate governance advocacies after a rigorous process.

Since the ICD’s establishment in 1999, only five Honorary Fellows have been recognized and inducted prior to Dr. Ortiz. These individuals who have excelled professionally contributed significantly to their industry and the country, upheld the highest standards of ethical behavior, and pushed the governance reform agenda.

In his acceptance speech, Dr. Ortiz cited the importance of technology in enabling governance models focused on reducing agency and moving accountability higher up, “so as not to compromise the enterprise in this business environment of constant whitewater and positively even make decision-making more efficient, effective, and in near-real time.”

“In UnionBank, we are already working on this, and so should we all, in order to enhance the value creation of good governance even further for the enterprise, its stakeholders, and society at large, so that we may all have a prosperous Philippines that is inclusive,” Dr. Ortiz said.