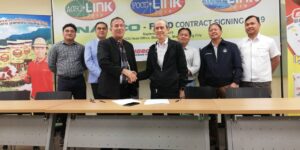 UNAHCO will feature Early Wean, Sarimanok Feeds, Univet’s“Galing Univet, Galing Univet” products namely Latigo, Miroban GT and Vetracin Gold with probiotics. Their products bear the seal of quality and have passed ISO and Halal Certification.  Pigrolac, Univet and Sarimanok products have earned the trust and loyal patronage of animal raisers and dealers. Univet top brands such as Vetracin, Jectran, Bexan, Latigo have been in the market for more than 50 years now and have become an integral part of the farm regimen of every successful animal raiser.

Pigrolac/Univet will hold two seminars during Agrilink,  the first is on Biosecurity Measures for the Control of Pathogens and the second is on “Pig Nutrition and Management to Promote Immunity” on Thursday, October 3, 1 to 3pm at the Luna Room.