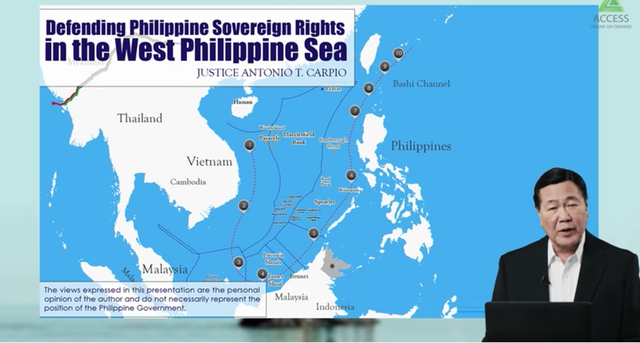 For the first time, Carpio recorded his “Defending Philippine Sovereign Rights in the West Philippine Sea” lecture and made it publicly available online. You can watch the lecture on Access Online’s YouTube account here.

It’s a signature lecture that has been delivered before countless universities, think tanks, and key officials in the halls of government offices. In carrying on with his advocacy, retired Supreme Court senior associate justice Antonio Carpio has now made available his West Philippine Sea lecture for every Filipino to watch

Carpio, one of the country’s leading experts on the subject, earlier shared he had taken up the task of defending the country’s rights in the West Philippine Sea after he penned the decision that upheld the constitutionality of Republic Act No. 9522 or the Baselines Law in 2011.

The case, Carpio said, showed the Philippines had a fighting chance agains

The case, Carpio said, showed the Philippines had a fighting chance against China if it asserted its rights in the West Philippine Sea in the legal arena. He later completed a world lecture sponsored by the Department of Foreign Affairs in 2015, where he presented the Philippines’ position on the dispute with China before think tanks and universities in 30 cities in 17 countries.

“It’s the duty of every citizen to defend the country in the best way he can…. Because it was a legal approach, I felt that I had the competence to convince the government to do it. And that is why I did it – because everybody should defend the Philippine territory and maritime zones. There is no exception,” Carpio said in a Rappler Talk interview with Rappler editor-at-large Marites Vitug.

Regarded as one of the country’s staunchest defenders of the West Philippine Sea, Carpio played a pivotal role in securing the Philippines’ historic victory against China before the Permanent Court of Arbitration in 2016. But despite this, the Duterte administration has downplayed the ruling in exchange for loans and grants from Beijing.

Nevertheless, the efforts of Carpio and others under the previous administration gifted the Filipino people with a permanent legal victory that cannot be altered no matter who the Philippine president is.

And though it has often put him at odds with President Rodrigo Duterte, the retired justice said the public can count on him to continue defending the West Philippine Sea.

“At age 70, I plan to spend most of my remaining waking hours defending our sovereign rights in the West Philippine Sea through the means I know best – through the rule of law,” Carpio said at one of his retirement celebrations in 2019.

With his signature lecture available for all to learn from, Carpio continues to do exactly that. – Rappler.com