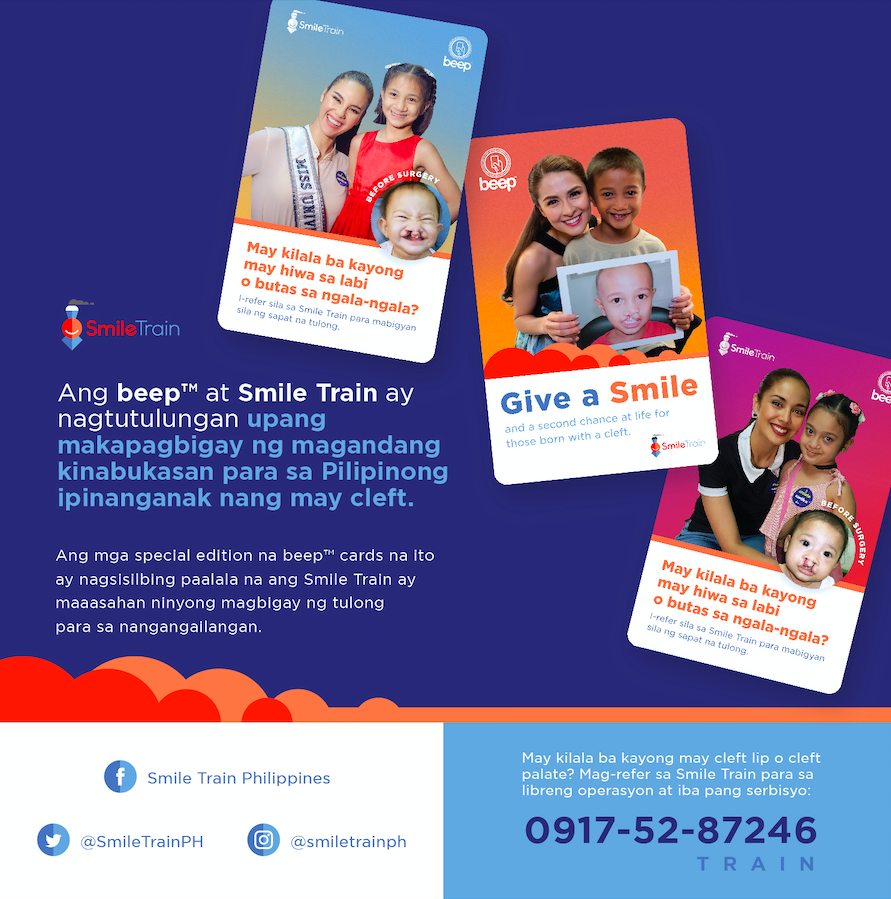 Smile Train, the world’s leading cleft charity, furthers its commitment to champion Filipino children with cleft and spread more smiles through a partnership with AF Payments Inc. (AFPI), the joint venture between Ayala Group and First Pacific Group behind the contactless smart card, beep™. To sustain its goal to provide children with cleft with the urgent support and care they need, special edition Smile Train beep™ cards will be introduced and made available at various MRT, LRT and bus stations in NCR.

“We are excited to be able to contribute to this noble cause and to be of assistance to children with cleft. During these uncertain times, they continue to need special care and assistance. We are grateful that Smile Train has chosen to partner with us and provide us this opportunity to help out and provide cards that bring a message of hope,” said Sharon G. Fong, Chief Commercial Officer of AF Payments Inc.

Smile Train’s series of special edition beep™ cards will feature celebrity goodwill ambassadors beginning with actress and model, Marian Rivera-Dantes who has been a supporter of the organization for over six years.  “Naging part kami ni Dingdong [Dantes] ng 30,000th cleft surgery celebration sa San Fernandino Hospital in 2014, at doon ako unang naging saksi sa life-changing work ng Smile Train. Inspired ako by their story so ngayon I make sure to help as much as I can and spread awareness para mas maraming tao pa ang mabigyan ng libreng operasyon at other services for children with cleft,” she shares.

[“Dingdong [Dantes] and I were part of the 30,000th cleft surgery celebration at San Fernandino Hospital’s in 2014, and there, I was able to witness Smile Train’s life-changing work. I was inspired by them and moved to do my part in raising awareness for Smile Train to reach more children with cleft and provide them with free operations and services.”]

The August launch of the first in the series of special edition Smile Train beep™ cards coincides with the birthday month of Marian Rivera-Dantes. Rivera-Dantes has been an avid supporter of the cause and has been known to mobilize her clout to further push for advocacies she espouses. The actress previously celebrated her birthday by coming up with her own fundraising efforts and donating half a million pesos to Smile Train Philippines gained through sales of limited edition shirts in partnership with one of the Filipino brands she endorses.