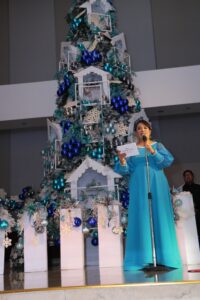 Celebrating the true spirit of the season, a donation was presented to Children’s Joy Foundation in support towards their cause of providing assistance and shelter to the children entrusted to their care. The event was concluded with a sumptuous dinner at Seven Corners.

Crowne Plaza Manila Galleria and Holiday Inn Manila Galleria invite you to celebrate the season with your loved ones over jubilant sojourns, yuletide celebrations, and myriad of gastronomic delights at Seven Corners, Xin Tian Di, Fab Restaurant and Bar One. Holiday hampers and delectable goodies are also available for takeaway. While, a blissful countdown party will also take place as we ring in the New Year.

UnionBank clients can now seamlessly do direct cash-in to their Shopee and Lazada wallets!

Emirates in 2021: A year of rebuilding and flying better