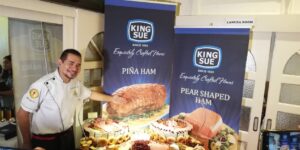 Chef Gene, who opened Café Ysabel at 23 and is now president of the pioneering Center for Asian Culinary Studies, pays tribute to King Sue products which have been a staple fare on the dining table as well as in his kitchen. “King Sue has been there at home ever since,” shares the author of “Cocina Sulipeña” and many other cookbooks.

He’d wake up to King Sue bacon for breakfasts as a student, enjoy Chinese ham during holiday festivities with the family, and rely on Chinese sausage for his Asian cooking and for his culinary school. “I also like their dried pork feet, which goes into my Spanish cooking and to my superior stock that gives my Chinese dishes authenticity,” he reveals.

“Rather than glaze a ham, you can braise it in a mix of vegetables and wine and the broken down vegetable puree acts as the sauce,” he confides. King Sue products are not only popularly available and dependable, they are also very versatile. “The dried pork feet are truly excellent for beans, fabada, and stews along with Spanish chorizos for Filipino-Spanish combinations.”

“The King Sue burgers can be redone with herbs to create meatball, while the luncheon meat has hundreds of applications as fillings for Vietnamese and German cooking,” enthused Chef Gene. But the best part of this, however, is that King Sue having withstood the test of time and changing markets, is also very reasonably priced for such top quality.

Hobby cooks and consultant could readily resort to King Sue when their or their client’s budgets get a bit tight so as to avoid sacrificing taste and flavor. Thus, the only Ten Outstanding Young Men Awardee for Culinary Arts, advised homemakers, chefs, and restaurateurs:

“Before you think deli items, take a second look at your King Sue products because they have great applications for reasonably priced ingredients with good quality.” 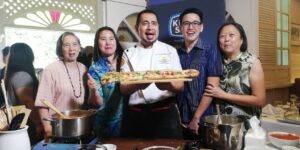