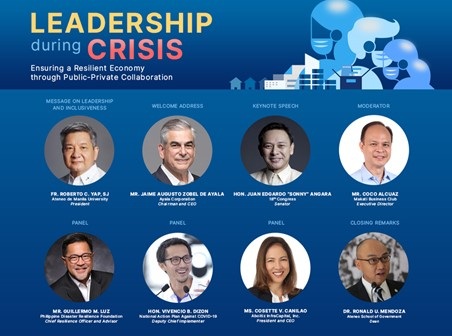 The Ateneo de Manila University’s School of Government, in partnership with the Ayala Corporation, held a webinar that tackled public-private collaboration efforts that aim to address the socio-economic impact of the pandemic.

The event, titled Leadership during Crisis: Ensuring a Resilient Economy through Public-Private Collaboration, was held last March 3 and hosted a panel discussion between government officials and business leaders.

Collaboration is the key

In his discussion, Ayala explained that the Philippines has a long way to go in its road to recovery. “Despite last year’s gains we must not lose sight of how fragile, in many ways, the situation remains for all of us. It will take some time before the country is brought back to full health,” Ayala said.

Though challenges abound in our road to recovery, Ayala sees collaboration as an important factor as we chart our path ahead. He said that the country needs three things: collaborative response, collaborative recovery, and collaborative resilience to ensure that we don’t only solve the problems facing the Philippines today but also make our economy and the entire country more resilient.

“Despite the difficult times we had last year and the many uncertainties that still lie ahead of us, I remain hopeful that our collective capabilities and commitment will carry us to recovery, resilience, and eventually, growth,” Ayala said.

Sen. Angara, who chairs the Senate Committee on Finance agreed with this notion and said that public-private partnerships during the start of the pandemic showed the spirit of bayanihan. He added that this type of close collaboration between the public and private sectors should be the norm from this point forward.

“Closer public and private sector collaboration should be part of our next normal,” Sen. Angara furthered. “With the immense challenges we face as a society it should be the rule instead of the exception.”

Working together towards resiliency

The discussion among the panelists also tackled how the partnership between the private and public sectors is paving the way to our recovery not only from the health and social impact of the pandemic but also from the devastation it has wrought on our economy.

“I’m a big believer in public-private collaboration. And certainly in times of crisis like what happened last year that highlight the agility of the private sector to fill in while the public sector seeks necessary approval to move forward. And that’s the essence of public-private cooperation,” Canilao said.

The panel noted that it is exactly because of this efficiency and agility that the public has significantly shifted their perception of the collaboration between the government and the private sector. They said that those communities and sectors that were directly affected by the pandemic really felt the efficacy of this type of partnership in addressing some of their most pressing needs.

“The private-public partnership that has been going on since the start of this pandemic has really changed the way we view how the private sector and the government work. I think in times of crisis, the president’s announcement early on that we have to work together as a whole nation—his whole of nation approach—really signaled that in order to get through this we need to work together,” Sec. Dizon said.

Ultimately, this interoperability between the government and the private sector is a strong model in times of crisis response and this might just be an important driver in building a more resilient Philippines.

“All of these partnerships can speed up recovery and pave the way towards a more resilient economy. We hope our citizens realize the important role played by our private sector in the past year or so,” Dr. Ronald Mendoza, Dean of the Ateneo School of Government explained.

“May the Filipino spirit of bayanihan inspire us to pursue closer partnerships with one another to ensure a more resilient, more inclusive, and better economy and country,” Mendoza concluded.

To watch the webinar, you may click this link: https://fb.watch/40XaqVMmcN/. For more information about the other future events of the Ateneo School of Government like and follow them at https://m.facebook.com/ateneosog/.